A couple of letters we received from Jaimi Foster from the University of Toronto Pickleball Club when they received some donated paddles and balls from the Ontario Pickleball Store to start up their newly formed club.

November  15  :My name is Jaimi and I am a third year undergraduate student at the University of Toronto. A little bit about my background: I grew up in Arizona, and my parents installed a pickle-ball court in our backyard in 2008; our family competed in the first ever USA Pickleball Nationals in 2009, as well as numerous tournaments after that. I have won the under 18’s girls national division five times, as well as won the under 18’s doubles and mixed doubles divisions numerous times. I am also featured in the pickleball instruction book: Pickleball Fundamentals,by Mary Littlewood.

Currently I play on the University of Toronto Women’s Varsity Tennis team. About a month ago, I introduced my teammates to pickleball, and we decided to start a club at the University. We are in the midst of trying to get funding from our student union, but our executive team has also been reaching out to pickleball groups within Ontario, as well as prominent Pickleball organizations within Canada, to try and procure either monetary grants for supplies, or donations of equipment: rackets, pickleballs, pop up nets, etc.

Last night when I got home, I found your package- I cannot possibly thank you enough for your generosity! We are beyond thrilled. And thank you so much again!

We’re always happy to see new players coming into the sport and love to help get new groups formed! 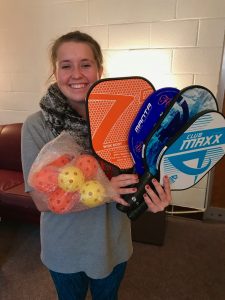 Get your outdoor balls before you head south!
October 31, 2017

Pickleball Products Shipped To Your Door